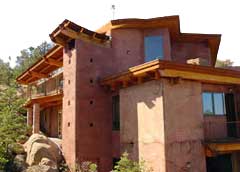 Poured earth is similar to ordinary concrete, in that it is mixed and formed like concrete and uses Portland cement as a binder. The main difference is that instead of the sand/gravel used as an aggregate in concrete, poured earth uses ordinary soil (although this soil needs to meet certain specifications) and generally uses less Portland cement. Poured earth could be considered a "moderate strength concrete." Little to no maintenance is required of poured earth walls, since they have a high resistance to the deteriorating effects of water and sun. 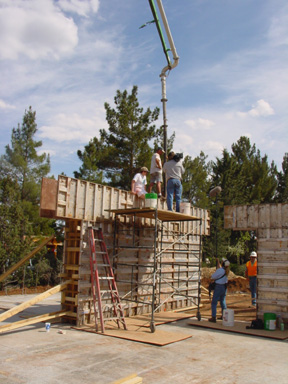 Ideal soil is basically low in clay (something ranging between silt to 3/8 inch aggregate). Poured earth materials need to meet certifiable engineering standards; appropriate testing needs to be done to assure a quality product. Testing should be done to determine shrinkage and compressive strength in order to make sure that the mix has very little, to no, shrinkage and has a compressive strength of 800-1200 psi. On-site soil can be ammended with off-site materials so that they meet appropriate strength and durability standards. When natural or synthetic flyash and lime is added to the poured earth mixture, the amount of Portland cement required can be reduced by up to 50%. Magnesium oxide can also be used to help further reduce the use of Portland cement.

Since poured earth is similar to concrete, local suppliers can provide the product which can then be pumped using traditional concrete pump trucks. Standard concrete forms can be used in preparation for the pour. 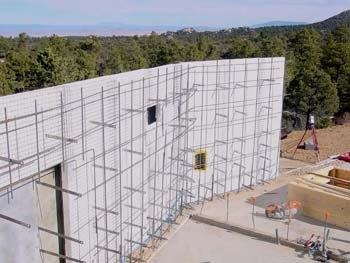 It is possible to incorporate rigid insulation within a poured earth wall, so that there is a thermal break between the exterior and the interior, thus allowing the interior portion of the wall to serve as appropriate thermal mass for the building.

Generally, poured earth walls increase the overall cost of construction by 10% - 20%, mainly because of the custom nature of the process. When more homes are built, then the economy of scale should make this method competitive with traditional building.

A variation of Poured Earth that has been around since cement was first formulated is Soil Cement. This is really just ordinary concrete with the sand/gravel aggregate replaced by soil. This especially works well with rather sandy soil, but will also work with other soil types. The heavier soils with more clay content will probably require more portland cement. Soil cement has been used to form walls, make floors, pave roads, stabilize river banks, etc.

Cast Earth is similar to Poured Earth in many ways; the main difference is that instead of Portland cement used as a binder, gypsum is used with a proptieatary technique of retarting its set-up time. For more information about Cast Earth see this page.