The Earthbag Architecture of Akio Inoue

The technique of building with earthbags has been finding adherents around the world. In addition to the experiments of Nader Khalili in the United States, I know of projects in South Africa, Uganda, Kenya, Afghanistan, Mexico, Japan, Cambodia, China and India. One person who has organized many such projects is Professor Akio Inoue of Tenri University in Japan . 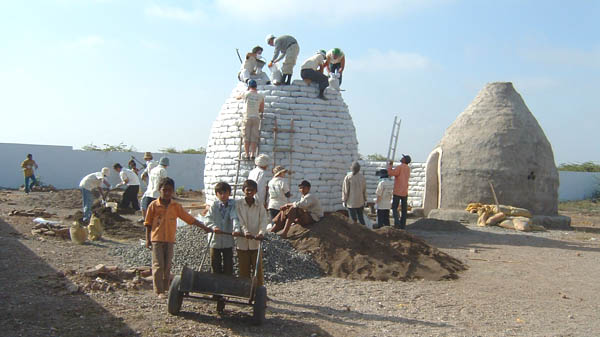 The Tenri University International Cooperation Project responded to the 2001 earthquake near Jamnagar, India by sending a group of 15 students and other personnel, including Akio Inoue as the project leader. They stayed for two weeks and constructed a 20 meter check dam (partially with earthbags), and two bongas (earthbag dome shelters with thatched roofs) near the village of Moda. They also planted 1000 young bamboos to use as roofing material to connect three earthbag domes for an elementary school in the Bolachadi village of the north-eastern area of Jamangar. These three domes were completed by subsequent groups of students over the next three years and were used for a library at the elementary school, which had suffered much damage from the earthquakes. These structures measured about 3 meters in diameter and 4 meters high. 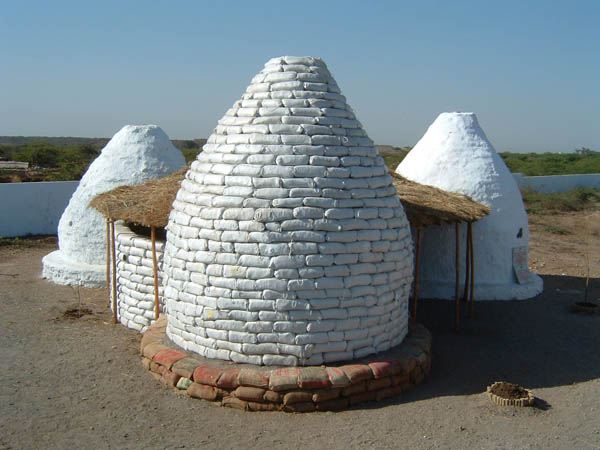 Sometimes they hired Indian workers, but also interested pupils and neighbors cooperated in the building when they covered the completed domes with cement stucco. Built-in earthbag benches provide seating for the students. The interior walls were left as white unfinished earthbags. 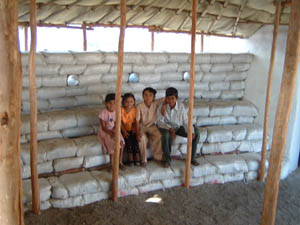 In Entebe, Uganda, the Tenrikyo Mission Center assisted Professor Inoue and some of his students with building some small earthbag domes, where they used the abundant soil taken from anthills to fill the bags. These domes are being considered for use as refugee shelters in the region, because they provide good protection from bullets, fire, wind, and rain.much better than the conventional thatched shelters or tents. Also, plans are under way for the construction of a Grameen Pig Bank and a church using the earthbag technique. 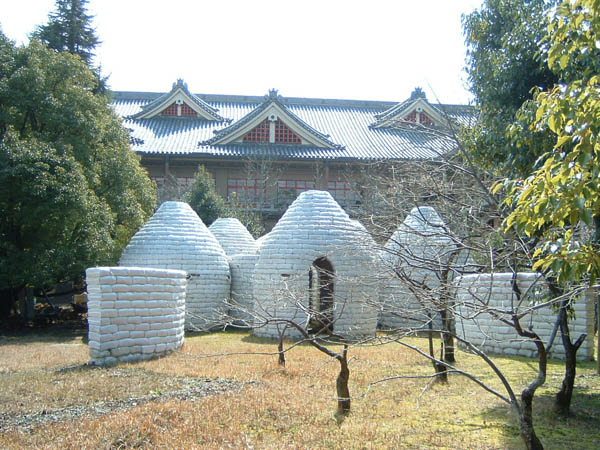 In addition to the disaster relief work mentioned above, Professor Inoue and his students have constructed 23 earthbag domes of various sizes in Japan, mostly on the campus of Tenri University as a Model Ecological Design Center. There is a lovely precise symmetry and grace to these buildings that is essentially Japanese in nature, which I greatly admire.